She Loves Tech 2019 crowns a winner in Pakistan 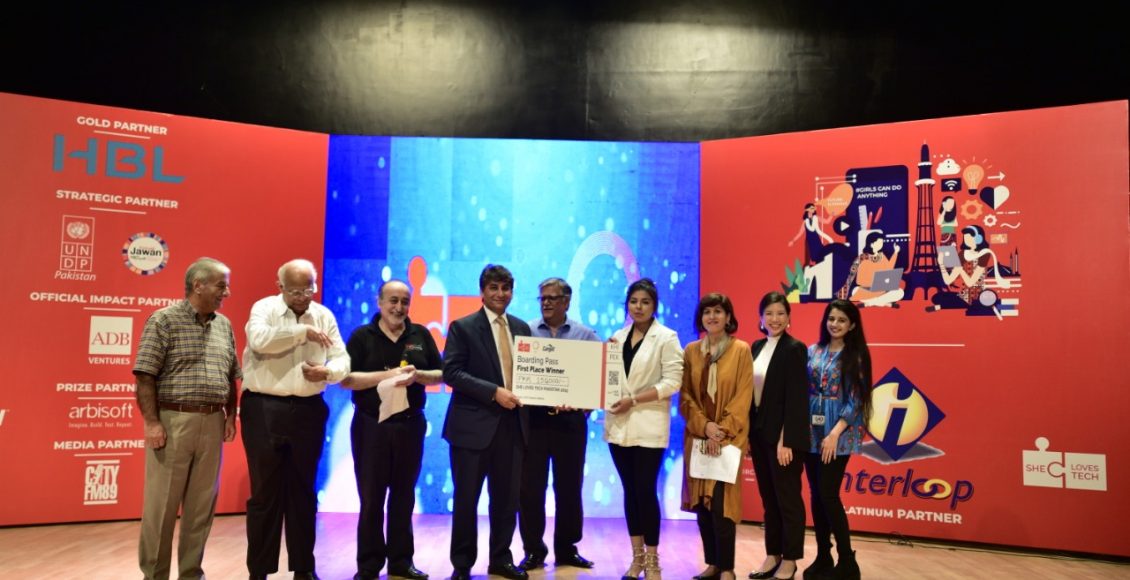 Lahore, August 5, 2019: The final round of She Loves Tech Pakistan 2019 took place on August 3rd at Karachi Arts Council supported by strong partners like Interloop Limited; one of the largest Hosiery manufactures of the world and a progressive company working on bringing more women into the workforce, HBL; the largest bank in the country and UNDP Pakistan. After competing locally, 12 tech startups led by women from all over Pakistan gathered in Karachi for the national finals. Inspiring female entrepreneurs presented their ideas to an esteemed panel of judges who then decided the final winner who will travel to Beijing, China in September to compete in the global finals.

She Loves Tech is the world’s largest women and tech startup competition focused on businesses either led by women or that impact women. It was launched in Pakistan in 2017 by CIRCLE, a social enterprise dedicated to advancing women’s economic participation in Pakistan, to encourage women-led startups to showcase their work to a large audience. Every year the national winner travels to China to attend the She Loves Tech Global conference to pitch their startup to an international audience as well as to participate in a boot camp. The conference is held in more than 20 countries and in over 4 continents and aims to provide female entrepreneurs with a chance to stand out in the entrepreneurial ecosystem.

The competition was designed to encourage women from diverse fields to participate. Issues in the fields of mental health, science, education, and tourism were all brought to the surface, as the participants discussed the challenges their companies address. Representatives from notable organizations including National Incubation Centers, NCCPL, and Ministry of Finance were present to encourage the women start-ups. She Loves Tech Conference 2019 was a combined effort of top organizations including Interloop Limited, HBL, and UNDP showing their strong commitment to diversity and innovation.  Moreover, Cargill, Arbisoft, and E.Ocean supported the initiative as prize sponsors. She Loves Tech Pakistan has been supported by Interloop as the Platinum Partner which is itself striving to bring about a diverse, robust and inclusive workforce by aiming to double women’s participation in their company by the end of this year.

The final began with an opening speech by Sadaffe Abid, CEO and founder of CIRCLE, and was followed by a powerful keynote speech by chief guest Dr. Shamshad Akhtar, Former State Bank Governor who said: “In this time especially, we must rely on the muscle of our women to uplift and galvanise Pakistan’s economy”. After this, Humayun Javed Khan, Head of Corporate Communications, Interloop Limited highlighted “We truly believe in inclusion and women empowerment and as part of our Vision 2020, we have made targeted efforts to hire, train & retain more women in #STEM, with currently more than 45% of our female employees having STEM degrees and working in such roles.” Other industry leaders such as Ikram Sehgal, Chairperson of K-Electric, and Mike Nithavrianakis, British Deputy High Commissioner, were also present to inspire young entrepreneurs. Leanne Robers, one of the co-founders of She Loves Tech, flew to Pakistan especially to attend the final.

A competition is only as good as its judging panel and She Loves Tech had some of the brightest minds from Pakistan’s tech ecosystem. The judges included Faisal Sherjan, Director of NIC Lahore, Dr. Ayesha Khan, CEO and Country Head Acumen, Dr. Sara Khurram, Founder, Sehat Kahani, Maleeha Bangash, Head of Ease of Doing Business & Investment Climate, Ministry of Finance, Government of Khyber Pakhtunkhwa and Humayun Javed Khan, Head of Corporate Communication, Interloop Limited amongst others.

Speaking at the event, Sadaffe Abid, CEO and founder of CIRCLE, said: “Technology is the future and with She Loves Tech we are encouraging women to believe in themselves and explore entrepreneurship and tech.”

Among the 12 finalists were The Mad Hatters by Aneeqa Ali, Foster Learning by Hira Javaid and Her Ground by Sadaf Naz from Lahore. XYLEXA by Neda Nehal and Shahrukh Babar and Aawaz by Dr. Seemab Latif from Islamabad were also part of the national contenders. Suii Dhaaga by Noor Ul Ain Awan and Chkar Lodging and Experiences by Izzat Bibi were the Abbottabad finalists. Nano Hive by Mahnoor Zafar from Peshawar also impressed the judges. EZMakaan by Marilyn and Jason Pereira, Closet by Laiba Aamir, PSSEC (Pakistan Science and Space Education Centre) by Zartaj Waseem and DOT – Mind Unlocked by Yishel Khan added to the startups which made the competition in the room fiercer. 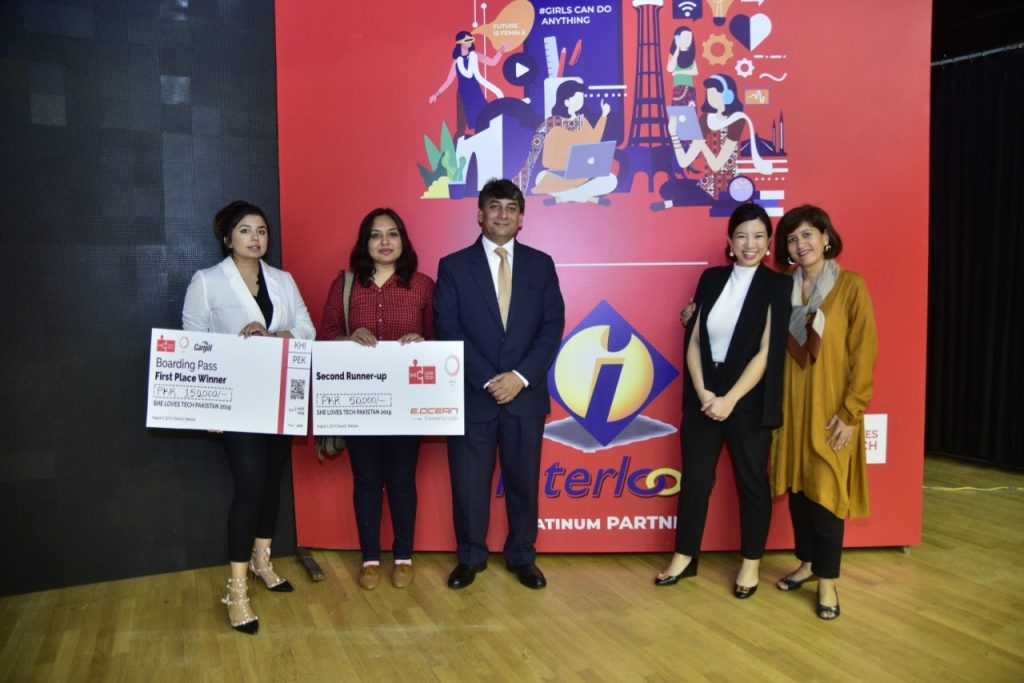 The strength of the ideas presented by the 12 startups made the judges’ task extremely hard. After much deliberation, the winner of She Loves Tech Pakistan 2019 was declared to be DOT-Mind Unlocked, a startup that has developed a headset that reads brainwave activity to diagnose and treat mental disorders such as ADHD more efficiently. Founder Yishel Khan won a Rs. 150,000 cash prize from Cargill and a trip to Beijing, China to compete in the Global Round for a $15,000 equity-free cash prize. The first runner up was PSSEC (Pakistan Space Science Education Centre) which offers hands-on, project based learning experiences themed around space science to encourage STEM education in Pakistan and co-founder Zartaj Waseem won Rs.75,000 from ArbiSoft. The second runner up was The Mad Hatters which is a female-led platform to allow travellers (especially female) to explore the culturally rich part of Pakistan with ease and guidance. For this, Aneeqa Ali won Rs.50,000 from E.Ocean.

Leanne Robers, Co-Founder She Loves Tech, expressed her appreciation, “I’m blown away with the amount of work that different businesses run by women across Pakistan are doing.”