Pakistan’s number 1 network Mobilink/JAZZ is under allegations by FBR due to the un-cleared tax amount of 25.3 billion and per the sources, the LTU has earlier directed the PMCL CEO to clear the taxes by Wednesday 28, Oct 2020.

As mentioned by the document available to the Mobilesjin, the FBR’s Large Taxpayers’ Unit-Islamabad has sealed PMCL’s F-8 office over non-payment of Rs 22.03 billion income tax (Rs3.3 billion default surcharge) for the tax year 2018. 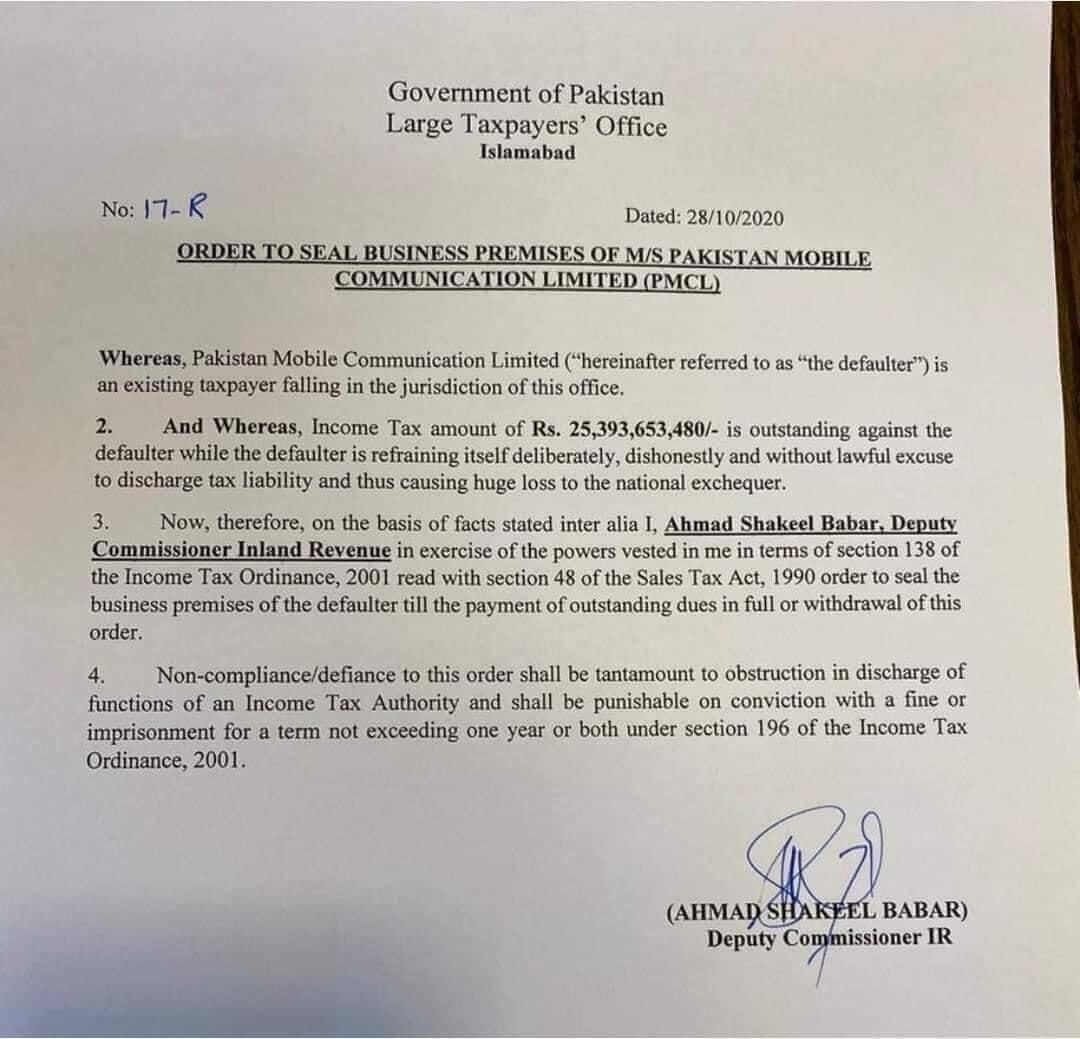 The orders are given on the authority of Ahmed Shakeel Babar,  Deputy Commissioner Inland Revenue, and stated as;

“PMCL is an existing taxpayer falling in the jurisdiction of this office [LTU Islamabad]. An income tax amount of Rs25,393,653,480 was outstanding against the said company, which has been refraining from clearing its liabilities deliberately, dishonestly, and without any lawful excuse, thus causing huge loss to the national exchequer,” the documents read.

“Therefore, on the basis of facts stated inter alia, I, Ahmad Shakeel Babar, Deputy  Commissioner Inland Revenue, in the exercise of the powers vested in me in terms of section 138 of the Income Tax Ordinance, 2001 read with section 48 of the Sales Tax Act, 1990, order to seal the business premises of the defaulter till the payment of outstanding dues in full or withdrawal of this order.”

The document further states that any kind of non-compliance/defiance to this order shall be tantamount to obstruction in the discharge of functions of an income tax authority and shall be punishable on conviction with a fine or imprisonment for a term not exceeding one year or both under Section 196 of the Income Tax Ordinance, 2001.

There’s a statement that has been come to the spotlight by the claimed defaulters Mobilink/Jazz;

“Jazz is a law-abiding and responsible corporate citizen. Our contribution to Pakistan’s economy over the past 25 years is significant. We have received a notice from FBR this afternoon. Jazz has made tax submissions based on legal interpretations of the tax owed. We will review and take measures under our legal obligations and will collaborate with all concerned institutions for an early resolution of this issue.”

We are trying to get further details from the other sources as well and nothing more could be said until the next official orders or statements.