--The first of its kind Corporate Coalition for Viral Hepatitis Elimination aims to improve awareness, screening, and linkage-to-care for viral hepatitis and ensure a work environment that is free from any discrimination for those with the disease-- 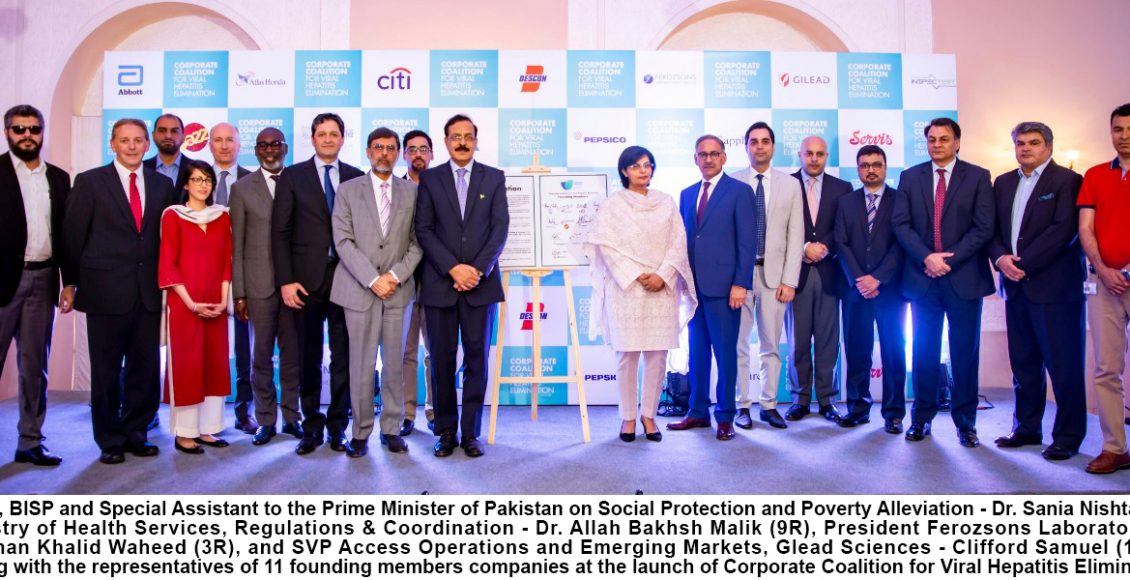 ISLAMABAD, 17 July, 2019: Gilead Sciences, Inc. today announced that it has partnered with 12 leading companies in Pakistan as part of the Corporate Coalition for Viral Hepatitis Elimination in Pakistan (CCVHEP) program to support the Government of Pakistan’s effort to eliminate viral hepatitis in Pakistan by 2030. CCVHEP was announced at a press conference in the city that was also attended by Dr. Sania Nishtar, Special Assistant to the Prime Minister on Social Protection and Poverty Alleviation, and senior officials from the Ministry of National Health Services.

The coalition is led by a partnership between Gilead Sciences and Pakistan partner, Ferozsons Laboratories Limited with founding members including Abbott Pakistan, Atlas Honda, Citibank Pakistan, Descon Oxychem Limited, InspecTest (Pvt.) Limited, Jazz, Nestlé Pakistan, Packages Limited, Pepsico Pakistan, Sapphire and Service Sales Corporation. It aims to improve awareness, screening, and linkage-to-care for viral hepatitis. It is also committed to ensuring a discrimination-free work environment for those with the disease.

“Viral hepatitis is a disease of epidemic proportions in Pakistan, impacting more than 7% of the entire population.  It has severe implications for our national productivity as well as our health indicators. Pakistan is committed to eliminating viral hepatitis as a public health threat by 2030. The launch of the Corporate Coalition for Viral Hepatitis Elimination, consisting of Pakistan’s most respected private sector employers, is a very encouraging development in this context,” said Dr Zafar Mirza, Minister for National Health Services, in a statement released at the ceremony.

“Addressing Hepatitis is foremost in national government’s health policy, and we will be launching the Prime Minister’s Program for Hepatitis Prevention and Control on the occasion of World Hepatitis Day later this month. We are also contemplating to launch a national screening program for hepatitis and linking it to effective treatment services. We invite the private sector to join hands with the government in helping achieve our national elimination goals”

Talking at the launch of CCVHEP, Dr Sania Nishtar, said that we hope to eliminate viral hepatitis in Pakistan by promoting public private collaborations. It is important area for us to focus on, as this disease disproportionately inflicts the poor and marginalized who usually suffer at the hands of bad health systems and practices. For all these reasons, the public health goal of viral hepatitis elimination and the launch of this coalition to support this cause is extremely opportune. It is indeed, a very pragmatic step by the industry and stakeholders.  There is a need that we understand that elimination of viral Hepatitis on a national scale requires public awareness and appropriate prevention strategies to tackle the epidemic.

Clifford Samuel, SVP of Access Operations and Emerging Markets at Gilead Sciences said, “Gilead Sciences is committed to working in partnership with governments, NGOs and the private sector to eliminate viral hepatitis in countries where the infection is highly prevalent. I am pleased to see the launch of the Corporate Coalition for Viral Hepatitis Elimination in Pakistan and I thank the leaders of these socially responsible companies for sharing our goal to help eliminate viral hepatitis in Pakistan by 2030.”

Pakistan has the second highest burden of viral hepatitis in the world, with an estimated 15 million people suffering from hepatitis B or C. According to a recent estimate, over 200,000 new patients develop hepatitis every year, and 10% to 40% of people with chronic infection may develop cirrhosis and potentially liver cancer. Many people contract the infection unknowingly, because of reuse of syringes, dental equipment and barber shop equipment.

Highly effective treatments for hepatitis C can cure the infection in over 95% of people. Hepatitis B can be prevented through vaccination. Those with chronic hepatitis B infection can manage the disease with lifelong treatment.

The private sector in Pakistan employs a large number of people and its commitment to the cause of viral hepatitis elimination strengthens the government’s response to the challenges posed by these diseases.

This initiative is in line with Pakistan’s commitment to the UN Sustainable Development Goals and the World Health Assembly’s declaration to eliminate viral hepatitis as a public threat by 2030. It is the country’s first such coalition of companies that will focus on both, preventing new infections and treating existing patients to prevent liver cirrhosis and cancer.