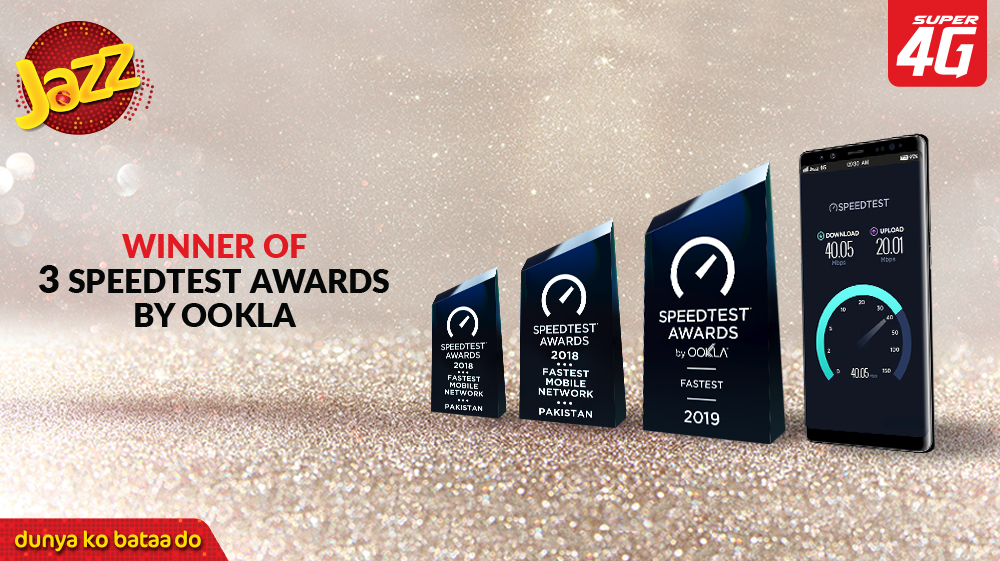 Islamabad – August 21, 2019: Jazz, Pakistan’s leading digital communications company, has been conferred the Speedtest Awards™ by Ookla®, for the third consecutive time. The results were announced after Ookla compared user-initiated tests taken on the Speedtest iOS and Android mobile apps from all major mobile operators in Pakistan during Q1-Q2 2019. The award marks a major achievement for Jazz for staying significantly ahead of its competitor telecom networks.

In the test, Jazz achieved a Speed Score™ of 14.97, with average speeds of 15.95 Mbps for download and 11.60 MBPS for upload. This Speed Score of 14.97 is significantly higher than other competing networks during Q1-Q2 2019.
Subscribe to the Jazz New Offers and Packages: Call Packages | SMS Packages | Internet Packages
CEO of Jazz, Aamir Ibrahim said on the occasion, “It is an honor to receive the Speedtest Award for the third time in a row. Jazz has cemented its position in mobile broadband performance and remains committed to delivering the best service to its customers through the country’s largest spectrum holding and superior network.”

“With millions of tests taken using Speedtest every day, Ookla has developed a robust and comprehensive view of worldwide internet performance. It is our pleasure to recognize Jazz as the fastest mobile network in Pakistan based on our rigorous analysis. This award is a testament to Jazz’s exceptional performance, as experienced by their own customers,” said Jamie Steven, Executive Vice President of Ookla.