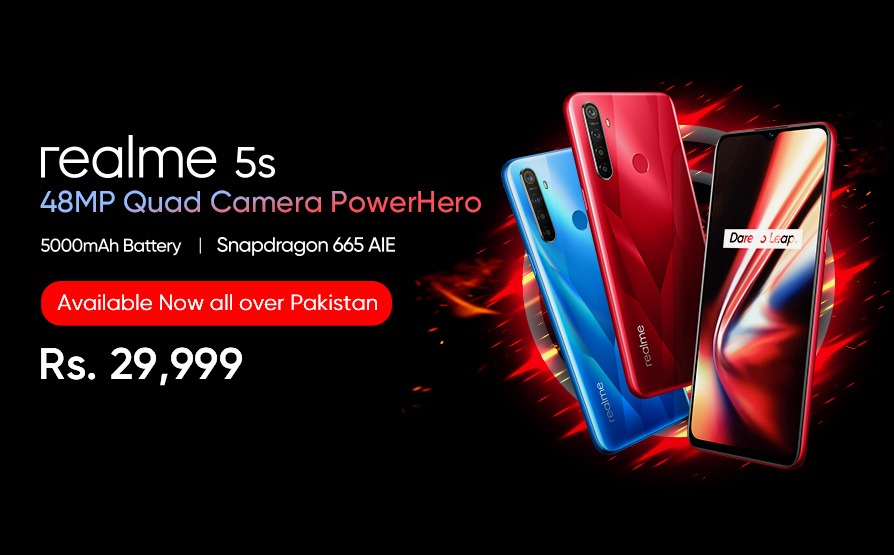 Lahore – 31st December, 2019: realme Pakistan recently launched highly anticipated its budget smartphone realme 5s  is now available all over Pakistan at an exciting Price of Rs. 29,999 . The realme 5s was launched in last week in a star studded launch event in Lahore , its key highlights include a 6.5-inch HD+ display with minidrop-style notch, a 5,000mAh battery, Snapdragon 665 AIE, and a quad camera setup at the back with a 48-megapixel main sensor.

realme 5s in available in one memory variant. with 4GB RAM and 128GB internal memory that costs Rs 29,999. This variants is available in two colour variants — Crystal Blue, and Crystal Red for the customers to choose from.

This new model is essentially the same as the realme 5 but with an upgraded primary sensor in the quad-camera setup. The 12-megapixel primary sensor has been swapped out for a 48-megapixel one, giving the new realme 5s considerable advantage. It’s a mid-range handset and it sits sort of right in the realme 5 and realme 5 Pro sector of the market. Upfront, the smartphone features a large 6.5″ display, it has got a 720p resolution of 1600×720 pixels. That being said, at its heart, the phone is powered by a Qualcomm Snapdragon 665 processor, and it also has a large 5,000 mAh battery keeping the lights on and it ships with a 10W power charger. 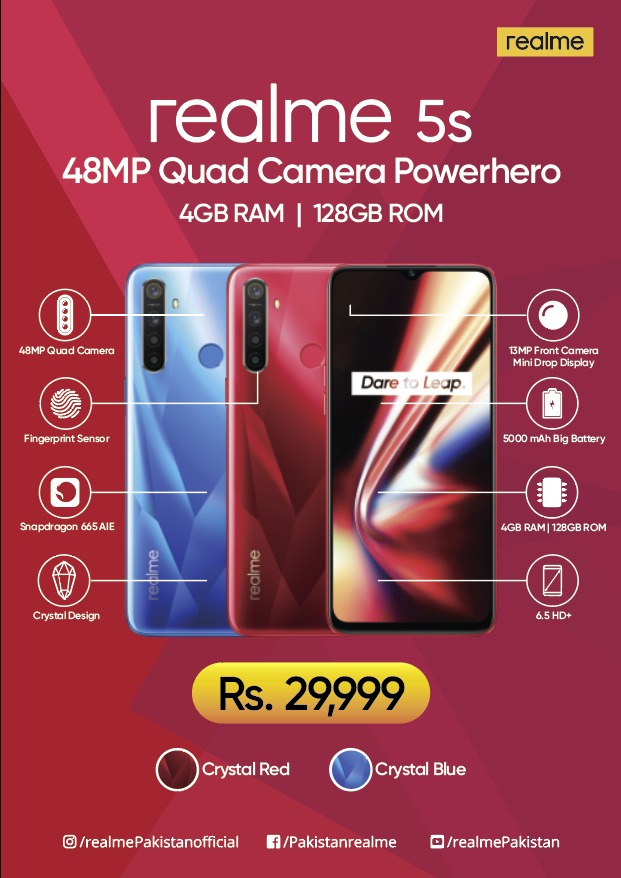 realme 5s will sport a diamond cut back panel design, a quad rear camera setup at the back. realme 5s features a quad camera at the back that revolves around its 48MP f/1.8 aperture wide angle main camera. Alongside this high resolution camera, you’ve got an 8MP f/2.2 aperture ultra wide camera, a 2MP macro camera and a 2MP depth sensor.

realme’s upward trajectory in Pakistan has been phenomenal since the brand’s entry last year, realme has been aggressive in its approach, launching successful budget to mid-range smartphones with an attractive spec sheet and affordable pricing. realme has made a name for itself by selling smartphones with powerful hardware at prices aggressive enough to go up against its competitors. Pakistani youth’s favored smartphone brand realme has quickly snatched market share from existing players and is fast becoming one of the most sought after brands. Since its entry into the Pakistani market less than 12 months ago, realme, has already launched 9 products across different price segments from premium flagships to trendy mid-rangers, all designed particularly for the youth. They are also gearing up for the launch of their latest additions in the classic realme series in the coming months. realme is proving it has planned an even steeper growth trajectory than its parent company through a targeted focus on the youth.

HONOR Pakistan outdoes itself with breakthrough releases in 2019

Ufone Brings STARZPLAY by Cinepax for U