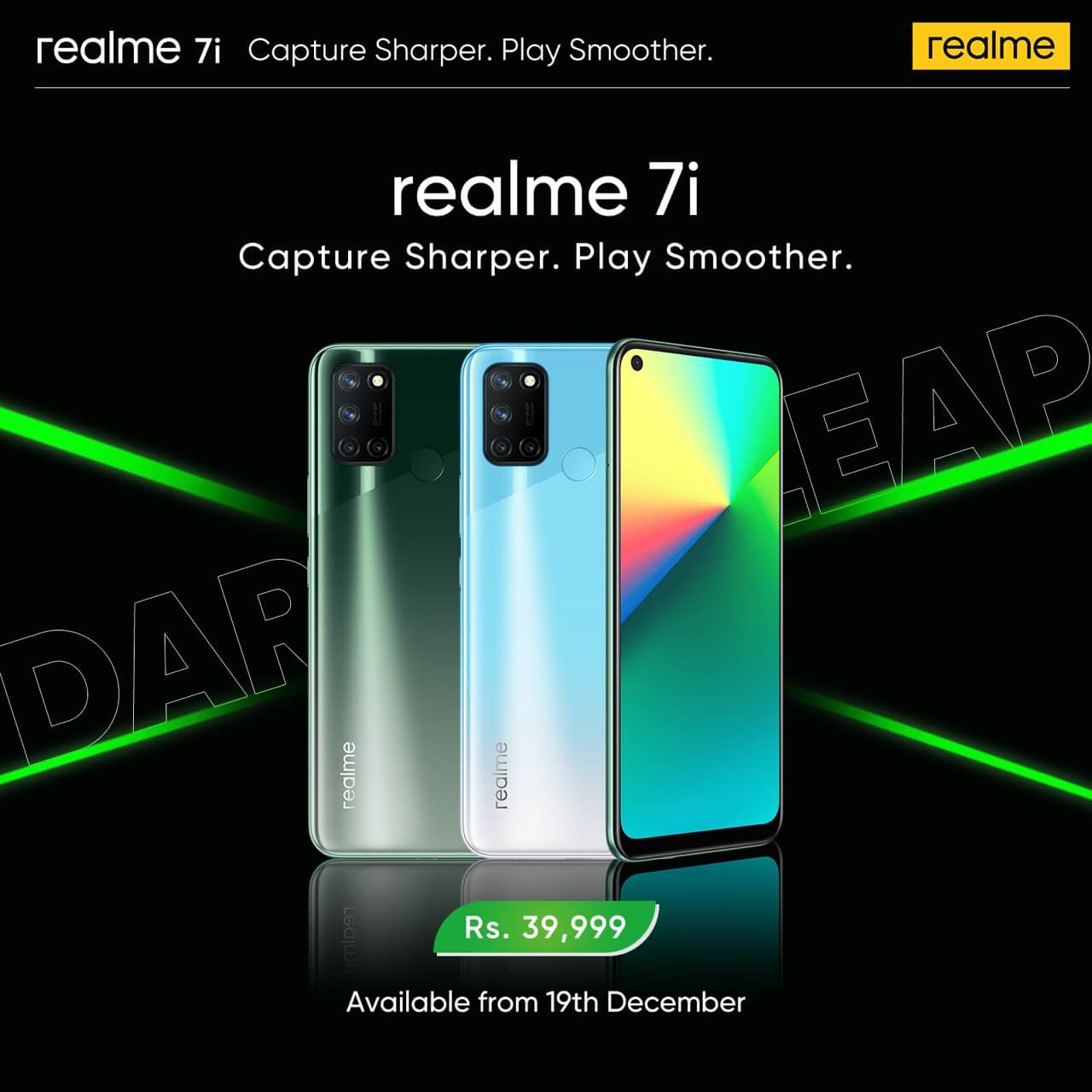 A big day for Realme fans! The world’s fastest-growing smartphone brand, Realme today officially launched a new benchmark in the mid-range smartphone, the 64MP Performance King Realme 7i. Along with 7i, the brand has launched its Realme Buds Wireless Pro, Realme Smart Scale, and an amazing designer toy, “Realmeow”. The devices shall be available on the upcoming Daraz.pk and Saamaan.pk on exclusive prices till the 18th December 2020.

The young and trendsetting brand, Realme is recognized as the number 1 selling smartphone in Pakistan by bringing the latest and trendsetting technology. With technology that has never been experienced before, the number series successor Realme 7i is the best camera phone under PKR 40,000 price segment. Realme 7i supports Snapdragon 662 with Kryo 260 structure in the CPU and Adreno 610 GPU and a seamless experience for users with 8GB+128GB internal memory. The phone is available at only PKR 39,999.

Realme believes in creating a smart life for young people with the internet of everything. For this, it has introduced AIoT products including Buds Wireless Pro and Smart scale. Realme Buds Wireless Pro features Hybrid Active Noise Cancellation (ANC Technology) up to 35dB, available at only PKR 9,999. With the belief of #NoiseOffMusicOn, it supports a 13.6mm Bass Boost Driver and high-quality wireless listening with SONY LDAC Hi-Res Audio and 22-hour battery life. To Scale-up Your Fitness, Realme has also launched another amazing addition to the Category N products ‘Smart Scale’. It comes with 50g High-precision, 360-day Long Standby., and 16 Types of Health Measurements including Weight, Fat Rate, Body Shape, BMI, Muscle Mass, Bone Mass, Heart Rate, and many more. It shall be available at an economical price of only PKR 5,499.

Realme also revealed its designer toy, Realmeow, as its Chief Trendsetting Officer to democratize the trend-setting culture in the launch event. Realmeow is a cat-like creature with its yellow body and wears a pair of black Lazer Glasses that can transform any object with just a glance. The inspiration for the character was taken from street-culture, but to make it more aesthetic and vivid, they put some elements from painting and sculpture. The character has been developed by the Directing Animator of Pixar’s Finding Nemo and Character Developer of Pixar’s Monsters, Inc., Mark A. Walsh. Realme believes designer toy is an excellent medium for more people to know and love the trendsetting culture. A movie featuring Realmeow’s adventures on Earth was also premiered at the event.

With the slogan ‘Dare to Leap’, Realme focuses on bringing trendsetting designs, improved software, and impressive hardware for enlightening the youth, making their lifestyle more fashionable. After the victory of Realme 7 and 7 Pro, 7i is expected to open new horizons for the brand along with other AIoT and Category N products. Realme is all set for Daraz 12.12 sale which will be live from 12 till 18 December. Plus, Realme products are also available on Saamaan.pk from 16 till 18 December, at exclusive rates. So do not miss this chance to grab your favorite trendy Realme products ASAP!

Realme 7i Price in Pakistan