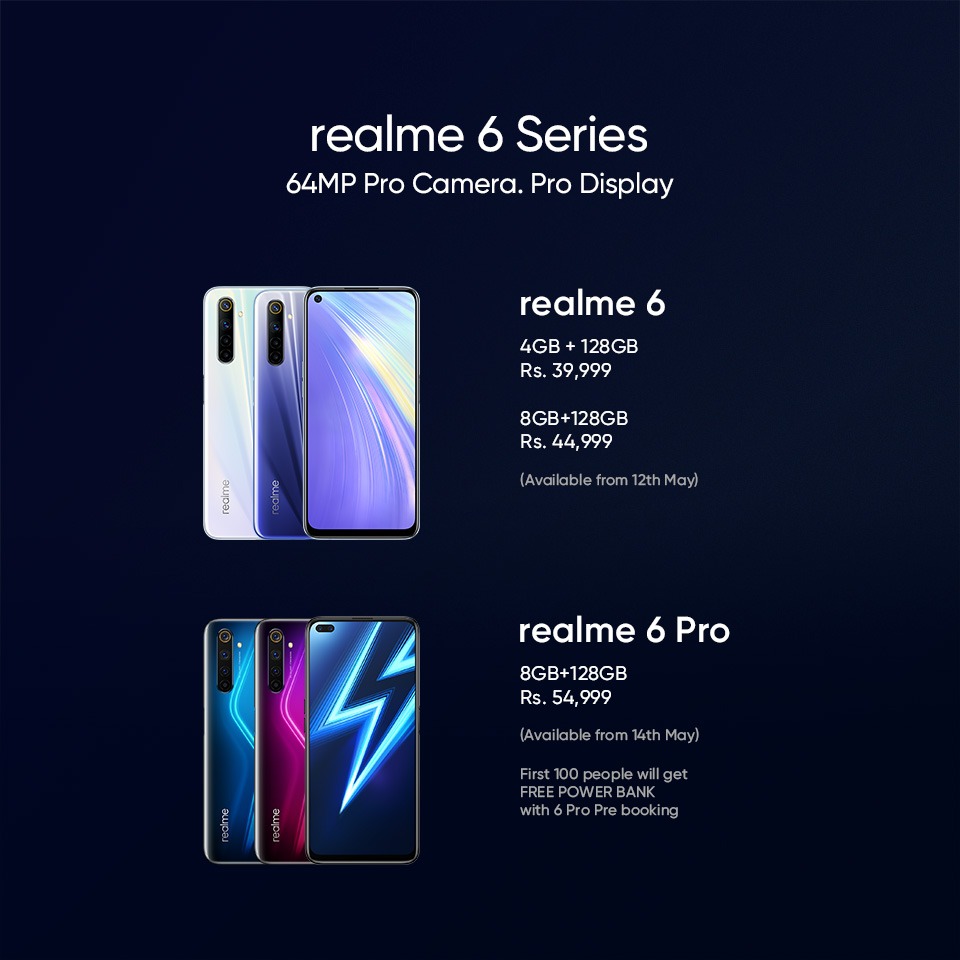 Lahore – May 11, 2020: realme Pakistan upped its game in the affordable smartphone segment by introducing two new models of realme 6 series at their online launch event on their Official Facebook page. Both realme 6 and the realme 6 Pro are two smartphones with Rs.39, 999 & Rs. 54,999 price tag to launch with a 90Hz punch-hole display panel. The new smartphone series, which includes the realme 6 and realme 6 Pro, offers 64MP Quad rear cameras. Where the realme 6 comes with a MediaTek SoC G90, the realme 6 Pro include a Qualcomm Snapdragon 720G chip. Both devices support 30 W quick charging with VOOC adapter in the box.

This is the first realme smartphone with Mediatek’s gaming-oriented G90T chipset. The 12nm platform brings an octa-core CPU with two 2.05GHz Cortex A76 big cores and six 2GHz Cortex-A55 power efficient cores, Mali-G76 MC4 GPU and is coupled with either 4GB, or 8GB RAM.

The realme 6 packs a 6.5” LCD, with resolution FullHD+ and it comes with 90Hz refresh rate. It has Gorilla Glass 3 on top and a punch hole for 16MP F/2.0 selfie camera with relatively large 1/3.1″ sensor.

There are four snappers on the back – 64MP main one with Samsung ISOCELL Bright GW1 sensor, 8MP f/2.3 ultrawide unit, 2MP dedicated macro shooter and a 2MP B&W auxiliary unit for enhancing the portrait shots.

On the inside, there is also a 4,300 mAh battery that could be charged in one hour with the 30W charger in the box.

The realme 6 Pro sports a 6.6” LCD with 90Hz refresh rate and FullHD+ resolution, which has a dual punch hole that hosts two selfie cameras. Those include a 16MP f/2.0 Sony IMX471 module and an 8MP ultrawide snapper with 105-degree field of view.

The setup on the back is also impressive – the main 64MP camera is accompanied by a 12MP f/2.5 telephoto shooter, an 8MP ultrawide angle snapper, and 2MP macro lens. The realme 6 Pro supports UIS and UIS Max Video Stabilization.

The battery of the realme 6 Pro is the same as its vanilla sibling – 4,300mAh cell with support for 30W fast charging.

The realme 6 Pro with two exciting Lightning Blue and Lightning Red colors is priced at PKR. 54,999/- for the 8/128GB version.

Jazz and Mountain Dew come together for an online gaming tournament