These amazing Y Series smartphones can be pre-ordered from Monday, June 22, 2020 onwards.

Huawei’s entry-level Y Series has a reputation for bringing in features from more premium phones, giving it a competitive edge in its segment. Be it camera, battery life, overall performance or even design ethos, each device in the HUAWEI Y Series is designed to make premium features accessible to more users. This is evident in its success in being a popular choice among customers since its inception in 2015.

Pioneering the entry-level segment, each device in the HUAWEI Y Series brings a fresh wave of innovation to its users, bringing to them new features and stylish designs with every smartphone. Huawei added two new smartphones to this series, both of them packing powerful features, while also being unique in their own aspects, the HUAWEI Y6p and HUAWEI Y8p. Both of these phones come with a wide range of interesting innovations that not only make them better smartphones, but revolutionizes the entry-level smartphone segment with some never seen before features.

First up is the HUAWEI Y6p that takes a different approach to changing things around in the entry-level segment. Aimed at users who do more with their smartphone and demand more battery life, this new smartphone comes with a massive 5000mAh battery that not only lasts long during intensive use, but can also act as a power bank to charge other devices. As with all Huawei products, this new addition also comes with a powerful camera setup in the form of its 13MP Triple Camera setup with a 13MP main camera which excels in low light, a 5MP Ultra-Wide and a 2MP depth sensor for natural bokeh effects. This is complemented by an 8MP Selfie camera upfront as well. Along with its large battery, the HUAWEI Y8p is also a powerhouse, with 3GB of RAM for smooth running of apps, 64GB of storage and an MTK Helio P22 processor for efficient performance.

Another one of its standout features is in regard to its audio. Thanks to HUAWEI SuperSound, audio is louder, clearer and sharper than ever before, while additional features like FM radio that doesn’t need earphones to act as antenna, 9.1 channel sky surround sound for immersive audio and party mode, further provide everything an audiophiles needs. In terms of display, the HUAWEI Y6p features the 6.3-inch HD+ display with a resolution of 1600×720. The back of the phone comes in beautiful colors of Emerald Green, Phantom Purple and Midnight Black while also housing the rear fingerprint sensor. 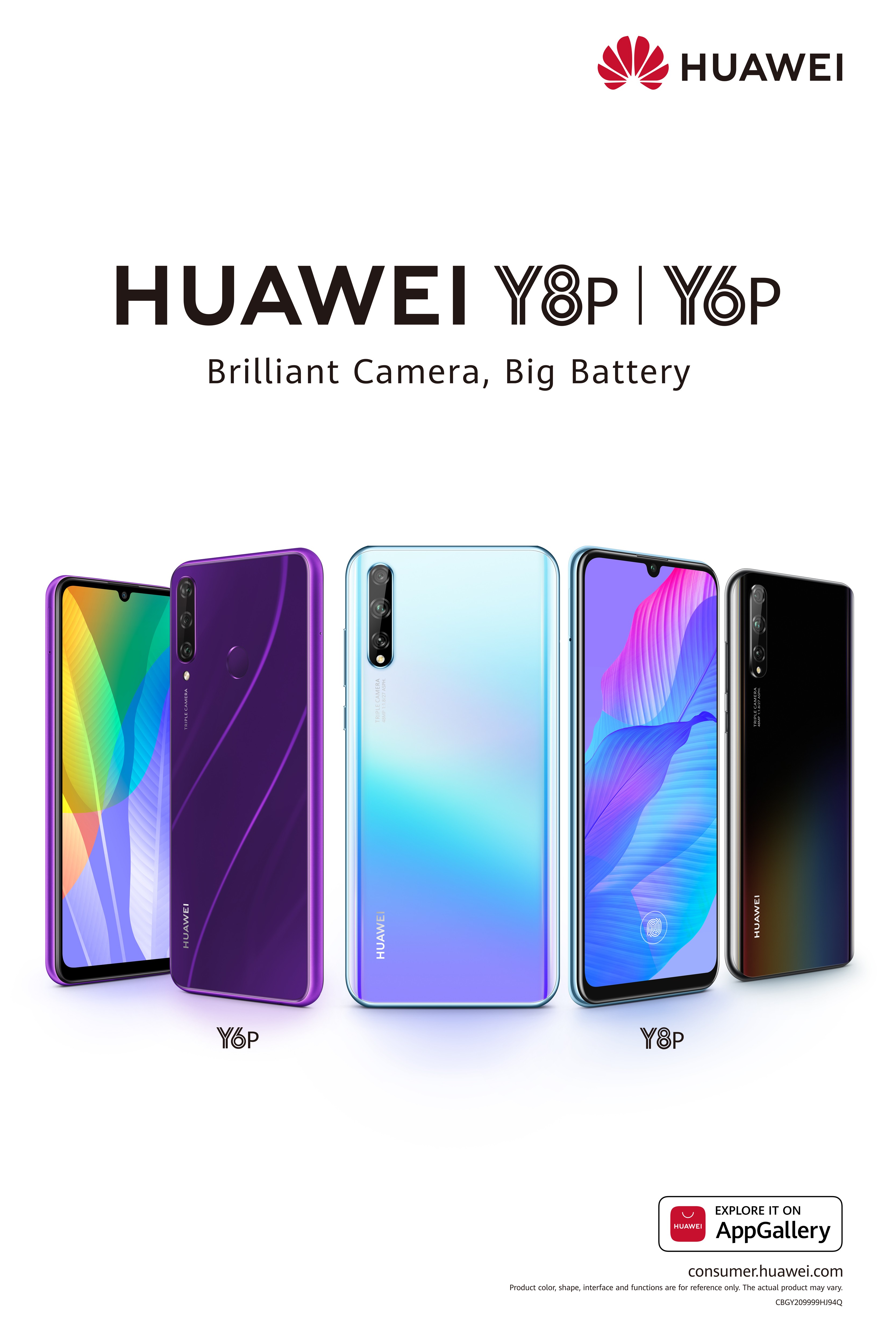 Next to that is the HUAWEI Y8p, which brings to the segment a 48MP AI Triple Camera, powerful performance and a stunning display. Its camera setup is quite impressive for an entry-level smartphone, in fact it is something that one would usually find on a more premium device. The setup consists of 48MP main camera, 8MP Ultra-Wide angle camera and a 2MP depth camera for bokeh effects. However, what truly shines in this setup is the HUAWEI Y8p’s capability for low light photography with the Handheld Night Mode that uses on board AI and camera sensors for well-lit shots in low light situations. This camera setup also brings to the entry-level segment a master AI that can recognize up to 22 scenes while shooting and intelligently adjusts any settings required for a perfect shot. Selfies are also vastly improved thanks to the 16MP AI Selfie Camera.

The HUAWEI Y8p also brings in outstanding performance with 6GB of RAM for smoother running of apps and software, with a massive 128GB of storage. It is powered by a 4000 mAh battery for all day performance, and runs on the Kirin 710F chipset with EMUI 10.1 for smooth and efficient performance. The HUAWEI Y8p also boasts its 6.3-inch HUAWEI Dewdrop OLED display, a first for the series. The display comes with an FHD+ resolution of 2400 x 1080 and even features an In-Display Fingerprint sensor, something not seen before in the series. The HUAWEI Y8p also continues with elegant design ethos with a 3D Curved Back design with nature inspired colorways of Breathing Crystal and Midnight Black.

Both the phones come with HUAWEI AppGallery pre-installed, which gives users access to a wide range of global and local apps which can be safely downloaded. The world’s third largest app marketplace, the HUAWEI AppGallery takes full advantage of Huawei Mobile Services (HMS) and features a variety of cross-platform apps for an all-scenario user experience.

With these new smartphones, as well as other phones in Huawei’s Y series, the brand has managed to revolutionize the entry-level segment to introduce devices that are not only affordable but also packed with premium features.

What is Pakistan Searching for? Insights for brands from Google Trends, Kantar TNS, Ipsos and others